The Origin of
Hunt for Hope
Cooper was a very active young boy.  To pass the time, he enjoyed running, playing lacrosse, strength training, and even cast iron cooking.  He loves anything to do with John Deere and farming, and you can find him either “harvesting” on a “farm” in a room of his house or virtually farming his acres on his pc simulator.  He also has one of the biggest hearts you’ll ever encounter and will happily help his parents, grandparents, and even friends and neighbors with any chores they have to do around their houses or yards.  At the time, there was nothing that he would let stand in his way to live life to the fullest.
However, in the winter of 2013, Cooper’s parents started noticing that his fingers would curl to his palms and wouldn’t straighten out.  Concerned, his parents took him to see a hand surgeon in June of 2014.  Unable to come to a definitive conclusion, the surgeon referred him to Akron Children’s Hospital in July of that same year for further testing.  There, they performed multiple tests to determine why he was losing strength and sensation in both hands.  Still unable to determine a cause, further testing in November of 2014 was performed.  Cooper underwent nerve conduction tests, an MRI, and a muscle and nerve biopsy—all to try to find out what was affecting him.  Finally, in January of 2015, Cooper was diagnosed with a quickly progressing and rare form of Charcot Marie Tooth Neuropathy, which, at present, has no treatment or cure.  Currently, he has very diminished use of his right wrist and arm and both of his hands.  The activities that he loved to do so much were starting to become fewer and fewer.
Back to November of 2014, while waiting for the results of the tests, Cooper still wanted to remain active with all of his favorite activities, one of which was being able to get his first deer.  Cooper’s parents wanted to make his dream a reality and contacted Denny and Dottie Campbell, the owners of Buckhaven Learning Center.  They asked the Campbells if they could bring Cooper to the center for a deer hunt.  Denny and Dottie agreed, and the hunt was able to take place on November 9th.  While Cooper’s hunt was being filmed, he was able to bag his first deer!  Cooper was ecstatic!  Being able to hunt and get his first deer brought so much joy and excitement to him!
After the hunt was finished, Denny stated that he kept watching Cooper’s hunt video, again and again.  He noticed how much the hunt meant to Cooper, and decided that he wanted to bring the same joy and excitement to other physically challenged youths who dreamed of hunting.
Hunt for Hope was born… 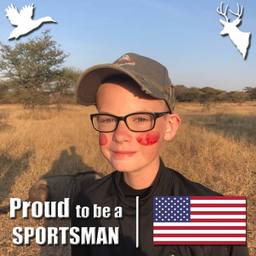